A vision of the future: José gets up at 5:30am. He takes a shower and goes down to the bakery. Rosa hurries the kids so they are not late for school while she makes arepas. At the bakery, José buys a few baguettes and cachitos. After hesitating a bit, he buys a packet of cigarettes at the corner kiosk. He knows he should quit smoking. But, it is difficult to kick the habit. José and Rosa are glad is Friday, and Rosa’s mom is going to take care of the kids tonight while the couple goes to the theater to watch a romantic movie. It was Rosa’s turn to pick the movie. The kids are also glad because they know they are going to spend the weekend at the beach. This weekend has something special, but is not uncommon. It is one of those that occur once or twice a month in which the family manages to break with the monotony of home, work and school. There is nothing out of the ordinary. There are no lines to buy food. There is no scarcity. There are no marches. There are no protests. There is no repression by the National Guard, the police or the colectivos. Nowadays, even weekends like this one become part of the family routine.

This image seems like a faraway dream for many Venezuelans. A life in which the recurrent problem for many families is: what are we going to do this weekend? This vision—which I would like to call future—of Venezuela sounds impossible in the midst of the crisis the country faces and President Nicolás Maduro and the chavista establishment’s hold on power. Despite the constant protests of the last two months, the government is not showing signs of changing its course.

Moreover, this future feels even more distant when we realized that opposition politicians do not appear to have a concrete plan for the reconstruction of the country in the post-chavista era. The lack of a plan is probably due to the fact that more immediate priorities (ousting the chavista leadership and bringing back democracy) are consuming the energies of the opposition. Even if there was a plan to end food and medicine shortages and to rein in the National Guard and the police, one factor that can jeopardize the reconstruction of Venezuela is the colectivos.

Colectivos (collectives in English) are groups of armed civilians loyal to the chavista cause and the Maduro government. They were established in the early days of Hugo Chávez’s administration (1999-2013) as community-based organizations. Later, the government began to provide colectivos with arms and training. Today, several colectivos engage in the repression of dissent along with criminal activities like drug trafficking and extortion. (For an overview of the colectivos, read the New York Times article referenced below)

Aside from the violent actions perpetrated against protestors, journalists, people and organizations tied to the opposition or anyone who publically speaks out against the Maduro government, the role the colectivos could play when chavistas find themselves out of power is not receiving the attention it deserves. Very few people have expressed concern about the future of these groups. Roberto Briceño León, director of the non-profit group Venezuelan Violence Observatory, told the New York Times that colectivos “are the true paramilitary groups of Venezuela.” In an interview with El Impulso, which is also quoted in the New York Times article, Venezuelan criminologist Fermín Mármol García explained that if chavistas lose power today colectivos would stop being paramilitary groups to become guerrilla groups. In El Nacional, a Venezuelan newspaper, lawyer and columnist Humberto González Briceño forecasted that the imminent “political change in Venezuela… will leave the armed chavista colectivos as that only defense group of the regime.” This situation, according to González, will result in a “violent and explosive” confrontation with the armed forces who until now have been forced to maintain a tense and contradictory relationship with the colectivos.

This terrifying possibility not only worries Venezuelan analysts but also officials in the U.S. government. CIA Director Michael Pompeo testified before the Senate Select Committee on Intelligence that the colectivos are well armed and that “the risk of these colectivos acting in a way that is not under [Maduro’s] control increases as time goes on.”

It could be said that once Maduro is no longer the president, colectivos will lose government support and with it the power and resources they enjoy. But, the situation is not that simple. The election of a member of the opposition to the presidency will not bring the complete ouster of chavistas from government. They will continue to have representatives in the National Assembly, governors, mayors and city councilmen/women. It is not hard to imagine that some chavista politicians will use colectivos during electoral campaigns to terrorize members of the opposing campaign or to intimidate voters at the polls. Also, colectivos could publically express their support for chavista candidates as another way of intimidating people who plan to vote against those candidates. This type of activities would be detrimental to the future of Venezuela. A political system in which candidates and voters are intimidated cannot be called a democracy. This goes against what all Venezuelans are hoping for, a return to democracy and to a peaceful and stable political process.

The worst case scenario is the one laid out by Mármol and González. If they adhere to their ideological position of defending the chavista cause by all means necessary, colectivos will become guerrilla groups. The nightmare that this possibility represents does not need much explanation. However, it is worth remembering that colectivos exert control over several rural and urban areas, which gives them a certain strategic advantage. As Pompeo explained, colectivos are well armed. Access to arms and ammunition will become difficult with a change of government. But, guerrillas have always proved capable of raising money and obtaining weapons through the illegal arms trade. Colectivos already have sources of income through drug trafficking and other illicit activities that serve to keep their arsenals full. 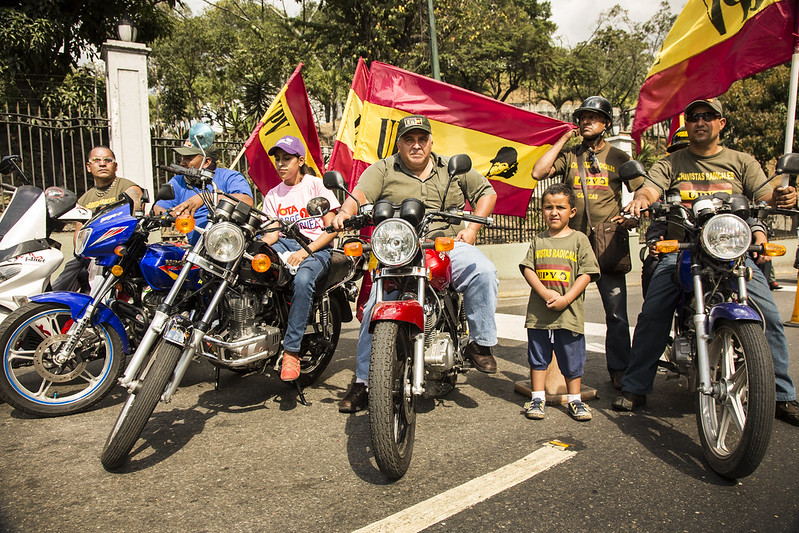 Criminality is the second route colectivos could take when the opposition takes over the presidency. If their position of defending chavismo at any cost is only rhetorical, colectivos will not become guerrilla groups but organized crime gangs. This is not only a political problem (combating crime is always part of political speeches and platforms) but also a social problem. Colectivos are already well versed in criminal activities, are well organized and possessed a sizable membership. Several areas of the country could become territories controlled by criminal gangs that would subject the population to a constant state of terror.

Whether they become guerrillas or criminals, colectivos are going to be a problem for the social and political stability of Venezuela. The image of guerrillas or criminal gangs causing terror in a society that seeks to recover from almost two decades of chavismo is depressing. It is to see the dream of a democratic and socially, economically and politically stable Venezuela turned into a nightmare. The solution to the problem is not going to be easy. Ideally, colectivos will abandon their arms and criminal activities to be peacefully incorporated into politics or to dedicate themselves to legal private activities. Most likely, the reality is going to be very different. Once someone has a taste of the power and independence colectivos enjoy, it is very difficult to give it up. Therefore, an opposition-led government will have to use aggressive measures to dismantle and end the colectivos. This situation will provoke a confrontation between the new government and the colectivos that will surely be, as González said, violent and explosive.

This future battle will make Venezuelan society—already fed up and tired of so much violence—live in a war-like environment without the country officially being at war. It will force the new government to invest time and money to fight these groups, minimizing the resources needed for the country’s reconstruction. The violence generated by this conflict will also undermined the government’s ability to run the country and get it out of the crisis, causing it to lose credibility with the people. Lack of credibility is the last thing the opposition needs after taking the helm of the state.

When the political change that all Venezuelans long for occurs, I hope the new leaders include in their recovery plan—if they have one—an strategy for dealing with the colectivos that results in the least amount of violence possible. Otherwise, the social and political insecurity in which Venezuelans live will continue to be part of everyday life and one of the worst legacies of this era will continue affecting a country that seeks to reemerge from the ashes of chavismo.

2 comments on “Colectivos: A problem for the future of the post-chavista Venezuela”